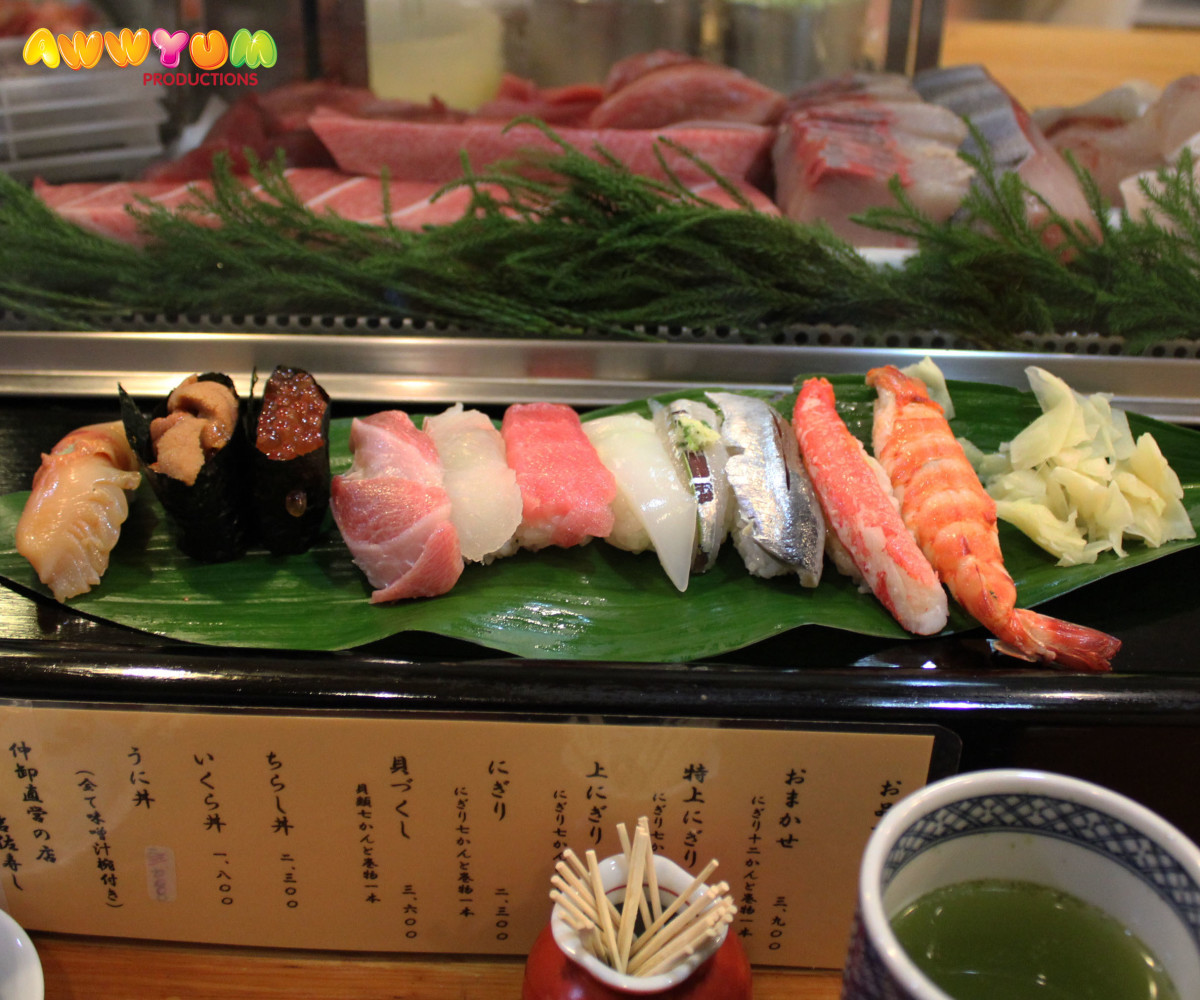 My trip to Tsukiji Fish Market was not the most conventional one. I was only staying in Tokyo for a short time and the only time I could visit the fish market was on my final morning in Tokyo (and needing to be at Narita Airport by 12pm to make check-in).

In addition to my time constraints, I also had a ‘night out on the town’ the previous evening, which consisted of skewers, nabe (Japanese hot pot), and various beverages (‘Hoppy’ anyone?). But that will be featured in another post.

Although the odds were stacked against me, here is my experience at the Tsukiji Fish Market. 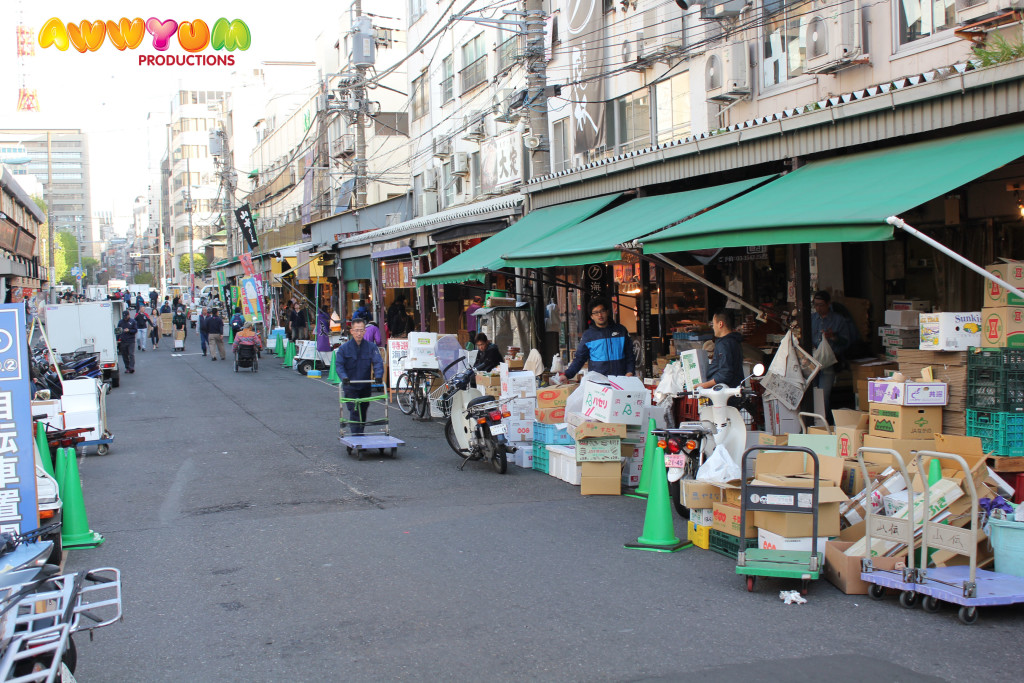 Because of the time constraints listed above, I needed to be on a train from Tokyo Station by around 10.30am, which meant that I needed to leave the fish market at 8am. Unfortunately I wouldn’t be able to visit the inside trading market which is usually opened to tourists from 9am – 10am.

Instead, I hoped to be one of the 120 people to view the Tuna auctions. My plan was simple – arrive at around 3.30am to snag a spot, and then watch either the 5.25am viewing or 5.50am viewing. Once the viewing had finished, then it would be a perfect time to grab some sushi breakfast and explore the outer market on the way out.

I finished the night-before festivities at around 1am, which only gave me a chance for a powernap before heading to the market. Surprising, the adrenalin was still pumping and I was certainly defying the odds by even staying awake! I walked from my hotel in Ginza to Tsukiji, which was a brisk 20min walk.

I eventually found my way to the meeting point for the tuna auction – a small outpost on the edge of the market complex, where two guards were standing. This was the big moment – I would finally be escorted inside and get to see behind the scenes…! However, unfortunately that morning I was too late! I arrived at 3.36am, and that particular morning (Monday 18 April 2016) the allocated was filled by 3.17am! Unbelievable!!!

This left me in limbo for a while. I waddled through the ‘outer market’ which is like a shopping strip – being a series of roads and small alleys lined with shops (as opposed to an actual market complex). However nothing was open. 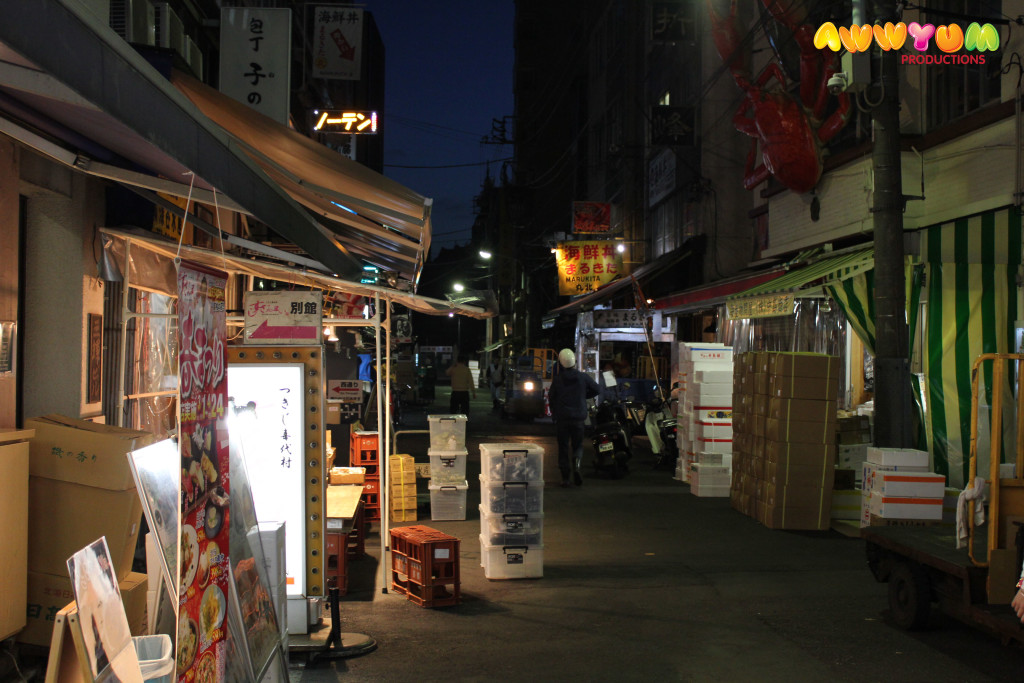 I also checked out the sushi restaurants located at the ‘inner market’. The usual suspects – Sushi Dai and Daiwa Sushi – had substantial lines from around 4.00am (none open at that time). 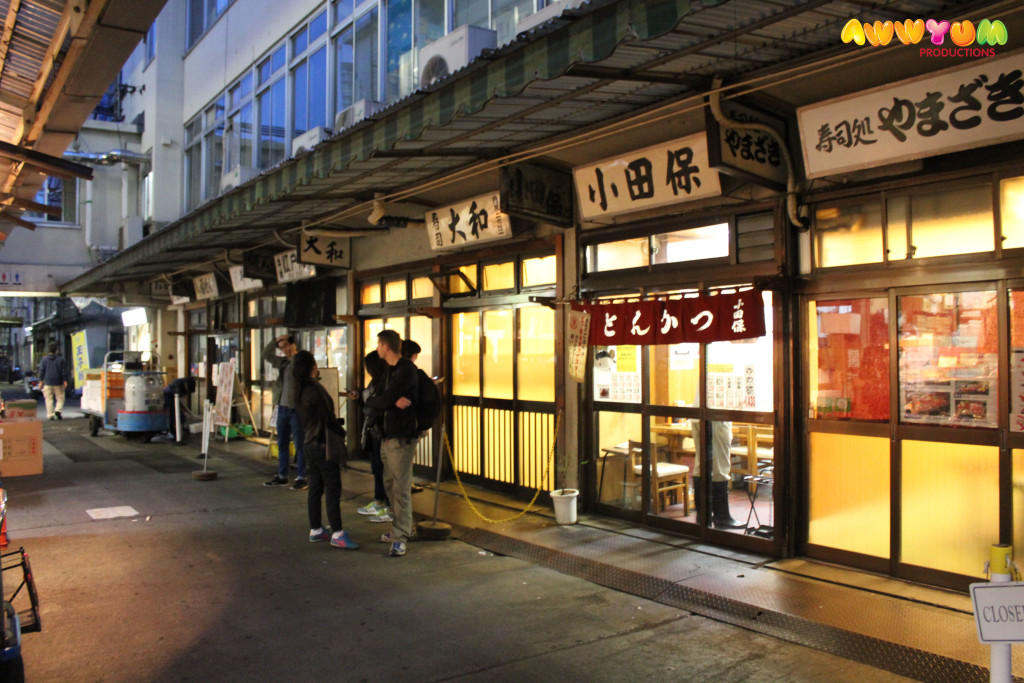 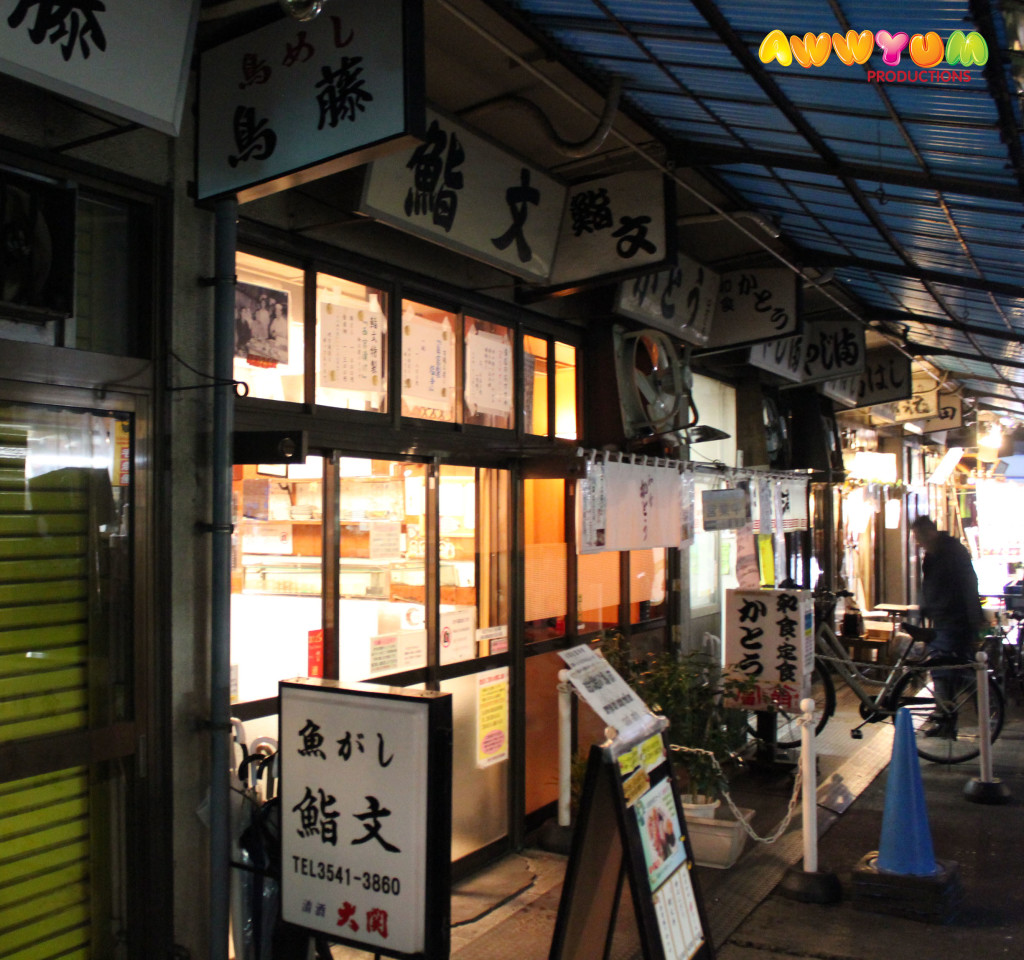 I also saw Nakaya, which I read is a good alternative for their uni (sea urchin) and ikura (salmon roe). Sadly they were only setting up while I was there. 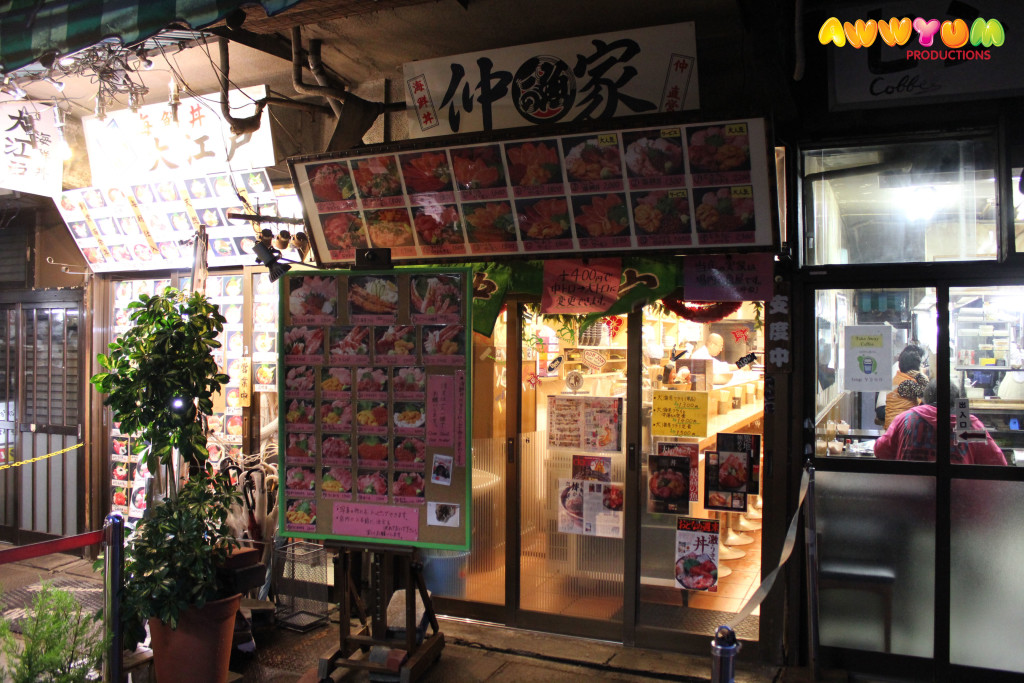 The market itself was abuzz with activity! It was difficult to take photos without being bowled over by trolley-trucks (or even bigger vehicles!). 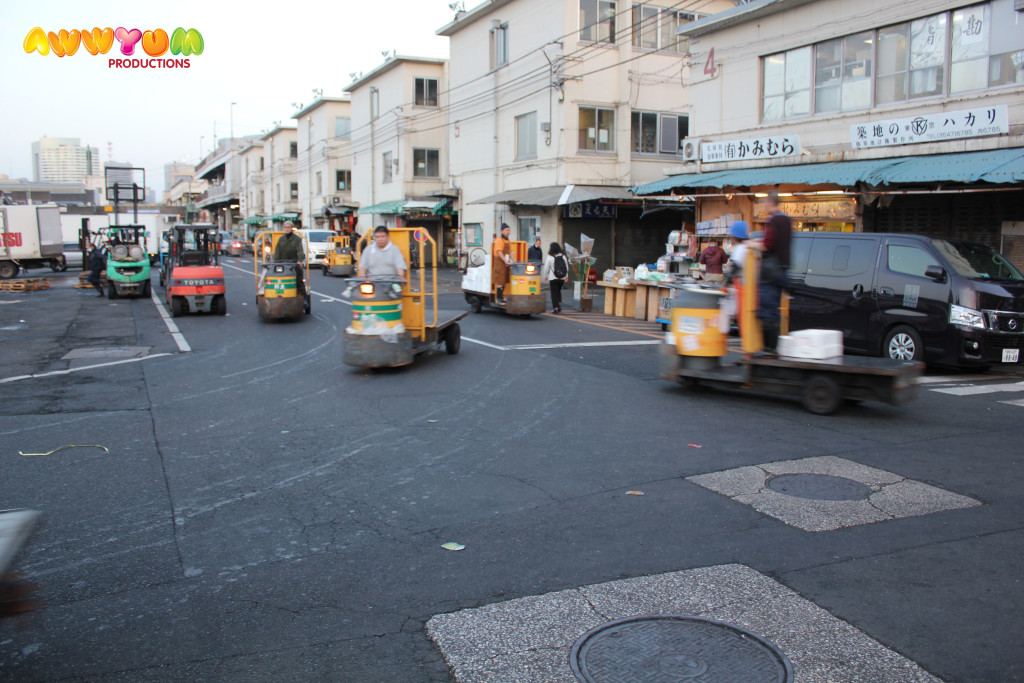 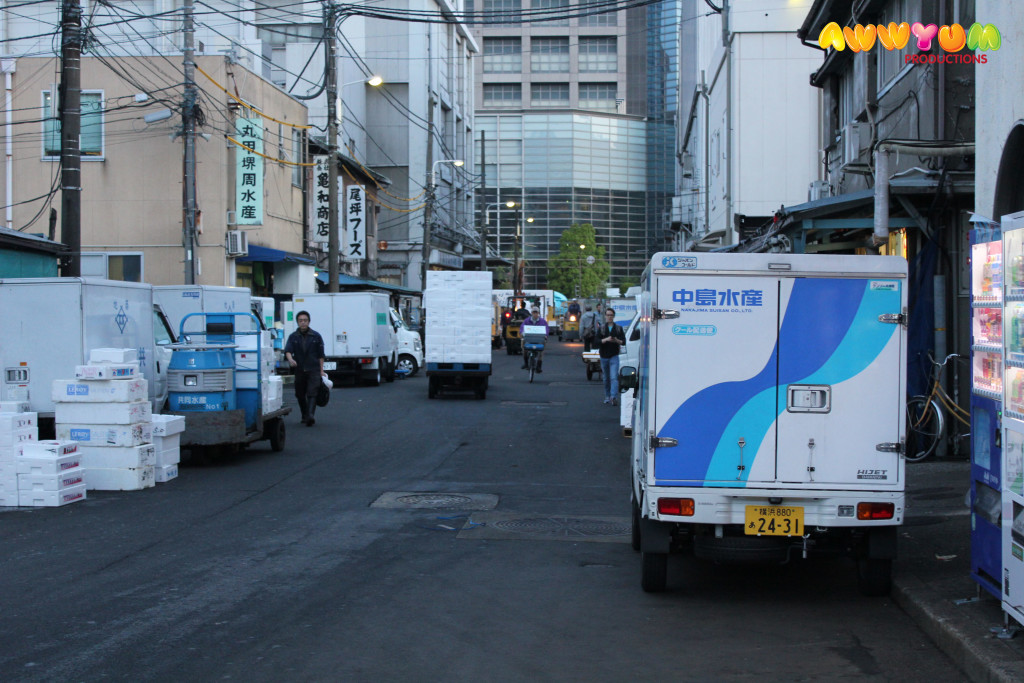 The size of the market was also evident from the number of customers loading their goods, as well as the sheer number of loading bays and platforms! 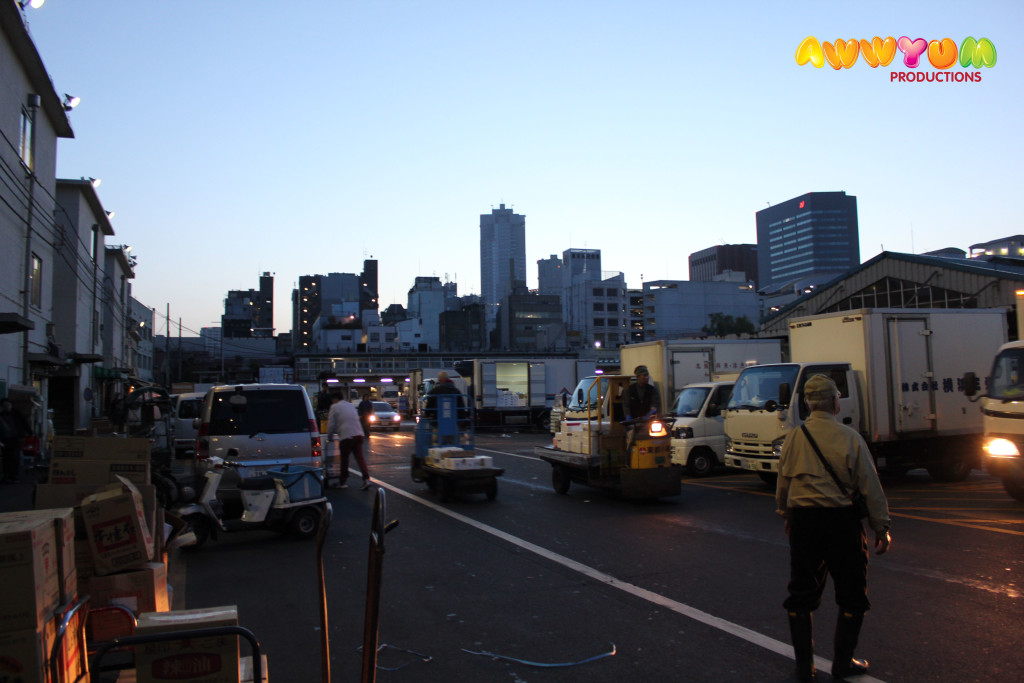 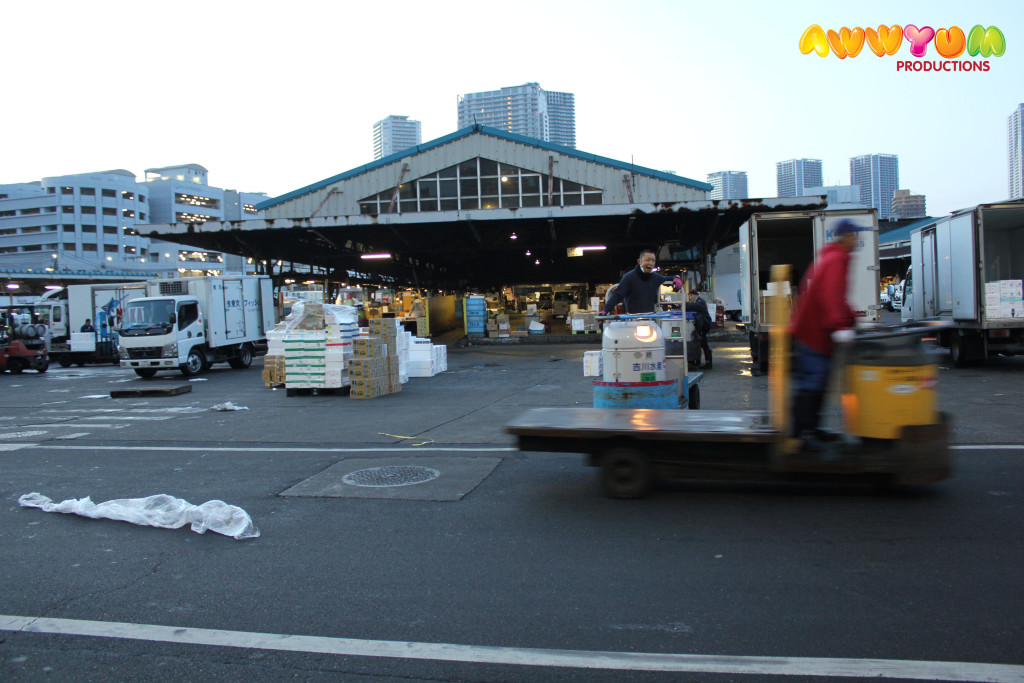 Having (literally) done multiple laps of all the shops and stalls outside of the fish-trading area, I was starting to get hungry. Fortunately one of the restaurants, which I assumed catered for workers, was open and I quickly stopped in to grab a katsu sandwich and coffee. 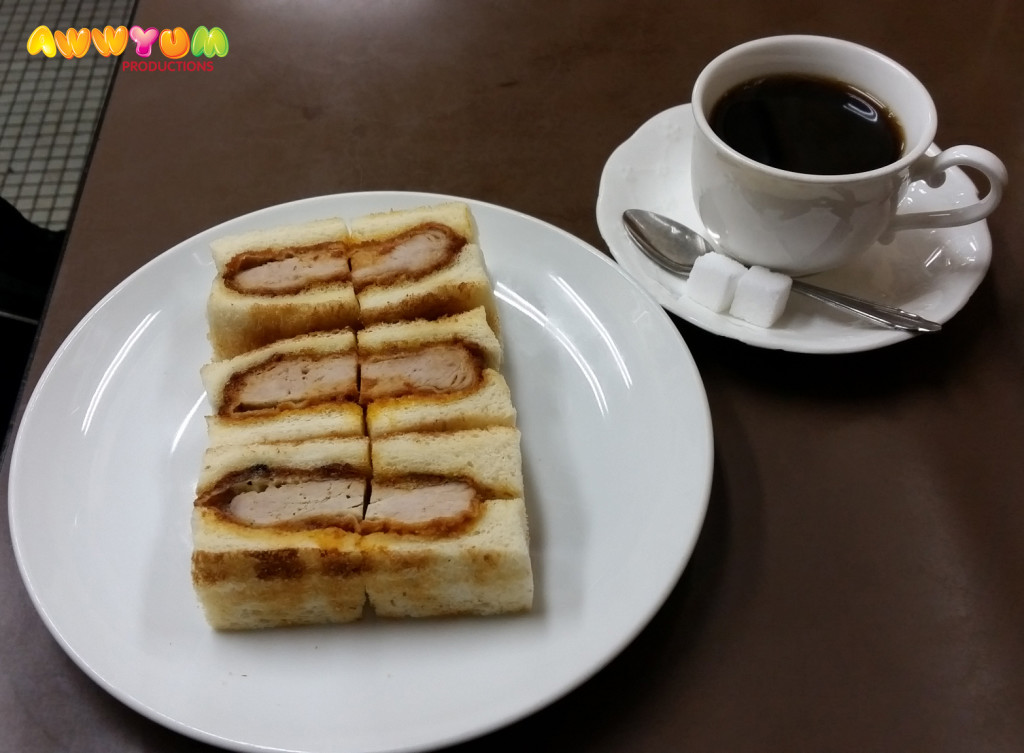 By this time it was around 4.45am… At 5am the sushi restaurants would start opening and I could at least indulge in my sushi breakfast!

Having seen all the different sushi restaurants, and not having time to wait more than one hour for Sushi Dai or Daiwa Sushi, the one that caught my eye was Iwasa Sushi. The signboard out front showed a good selection of sushi, and it also had a homely feel to it from the outside, due to the orange banner. 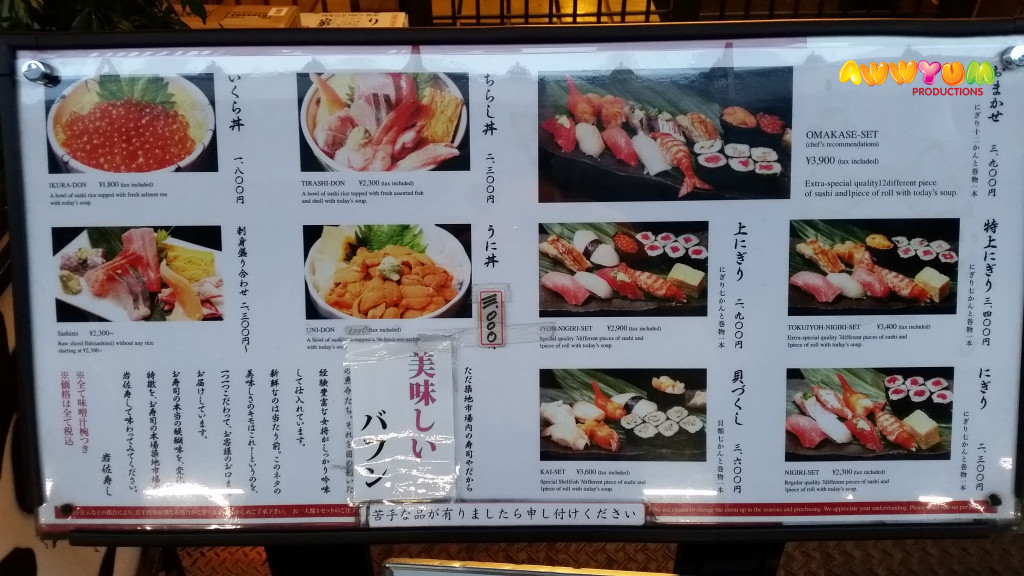 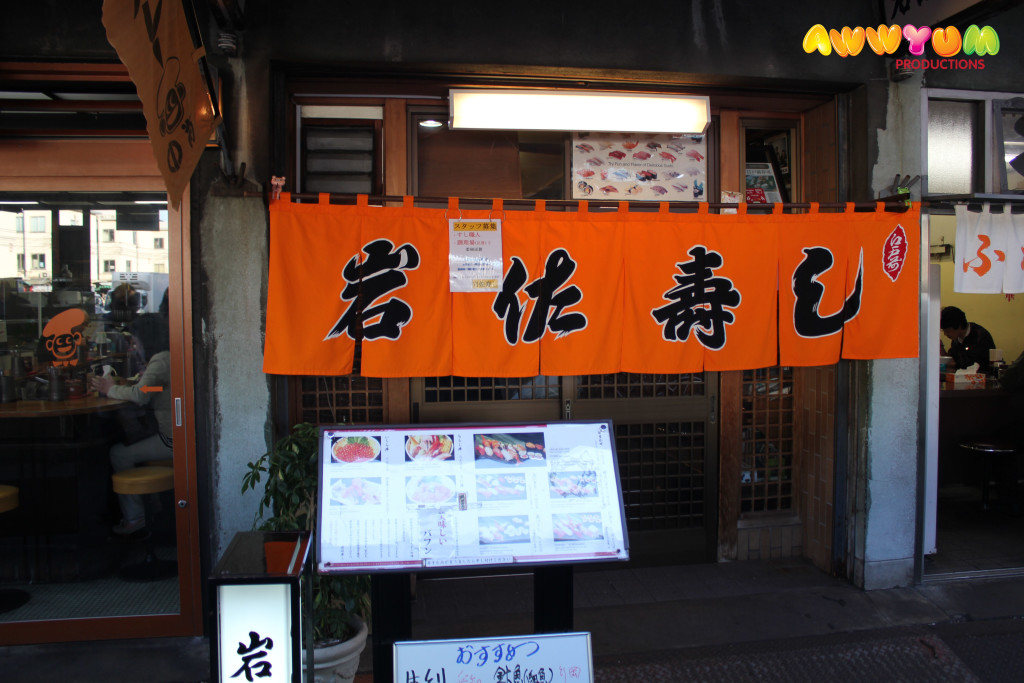 Iwasa Sushi is located at the Inner Market of Tsujiki Fish Market. But it is not in the aisles where most of the restaurants (and queues) are. Rather, it is in a separate row located behind a loading dock, but not that hard to spot. 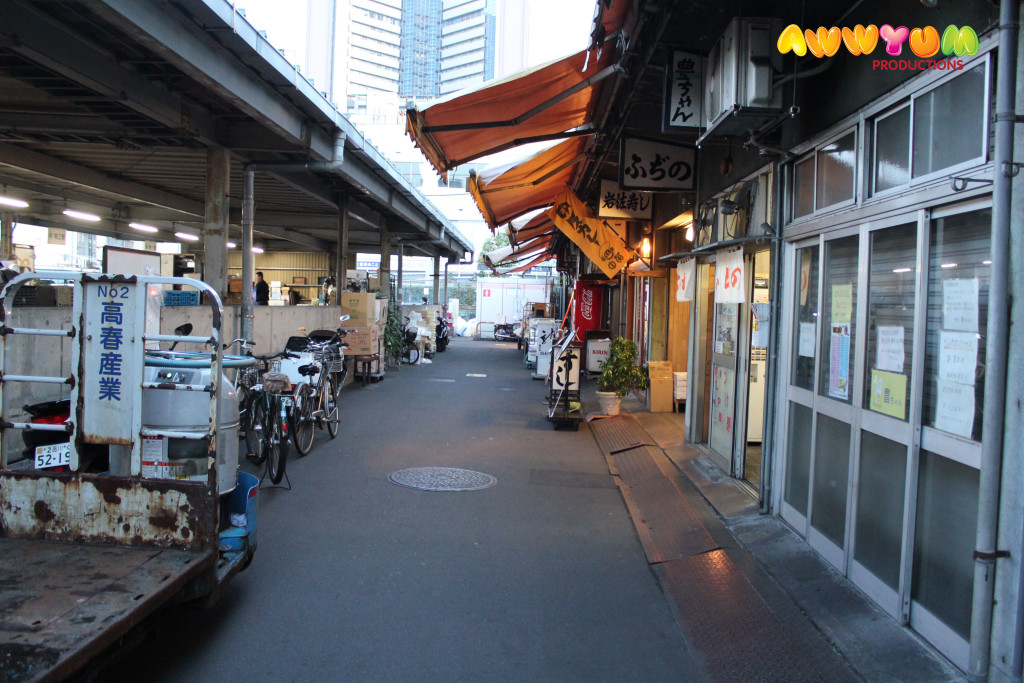 It was also open at 5am, which was handy. I went in and was not the first customer. There were 2 groups of Japanese customers who were ‘ordering up’ (one piece at a time) from the sushi chefs! I had a good feeling about the place! 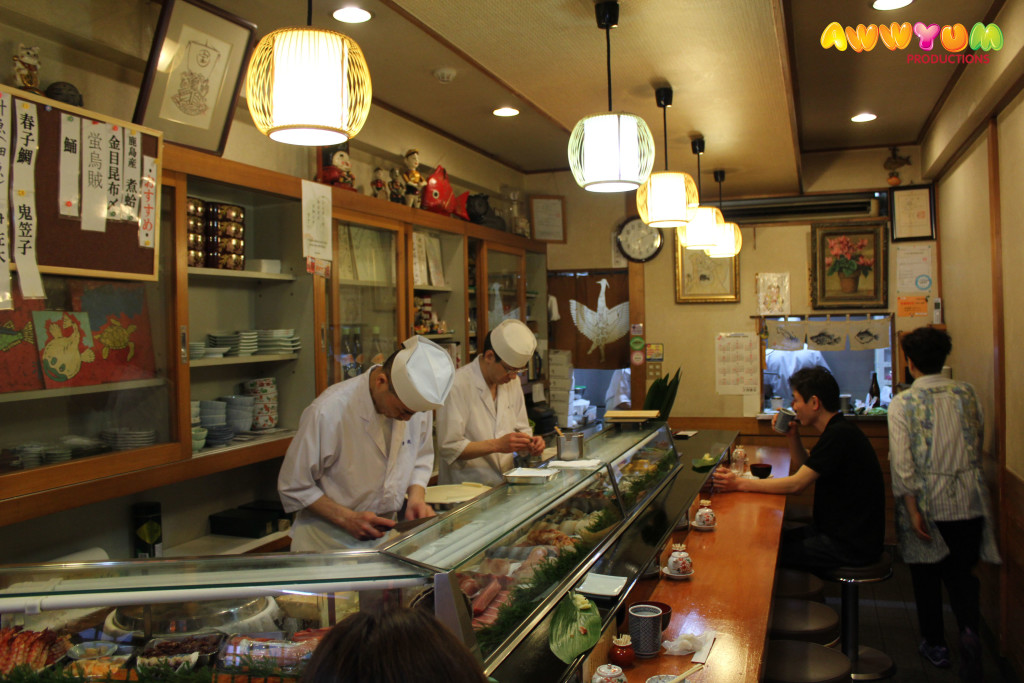 I really enjoy seafood. Fishing is also a pastime of mine. So fresh fish, prawns and shellfish are all fine for me. The selection at Isawa Sushi looked amazing! It was all there for the customer to see behind the glass. 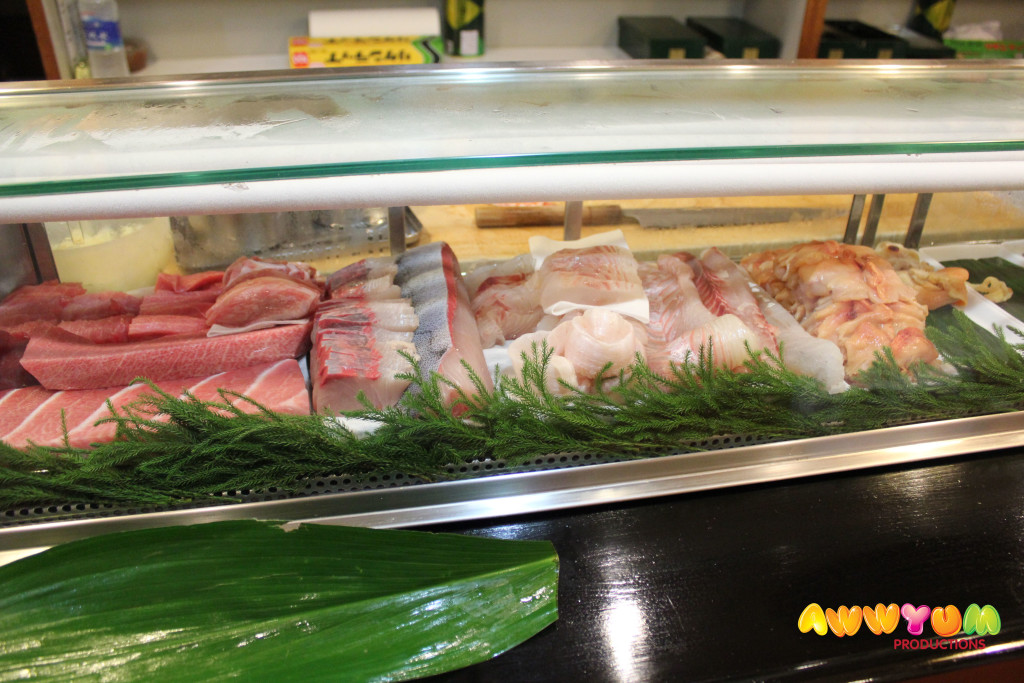 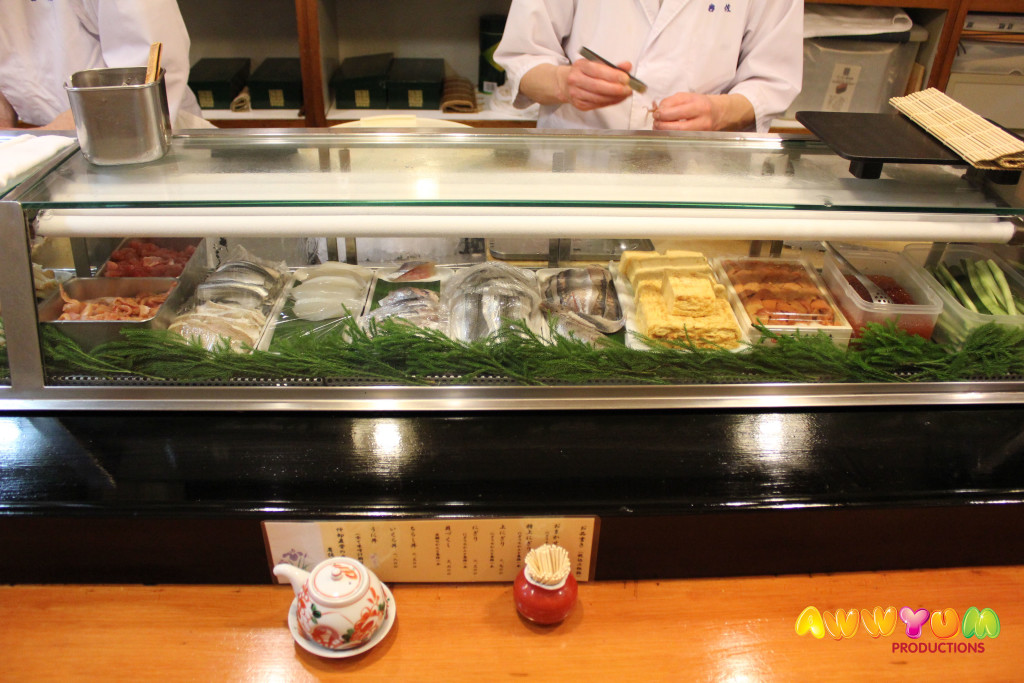 Isawa Sushi is known for its clams and shellfish selection. However, as I was only going to be at Tsukiji for one morning, I simply uttered one word – Omakase (chef’s selection)!

The chef then got to work and started preparing me a feast! 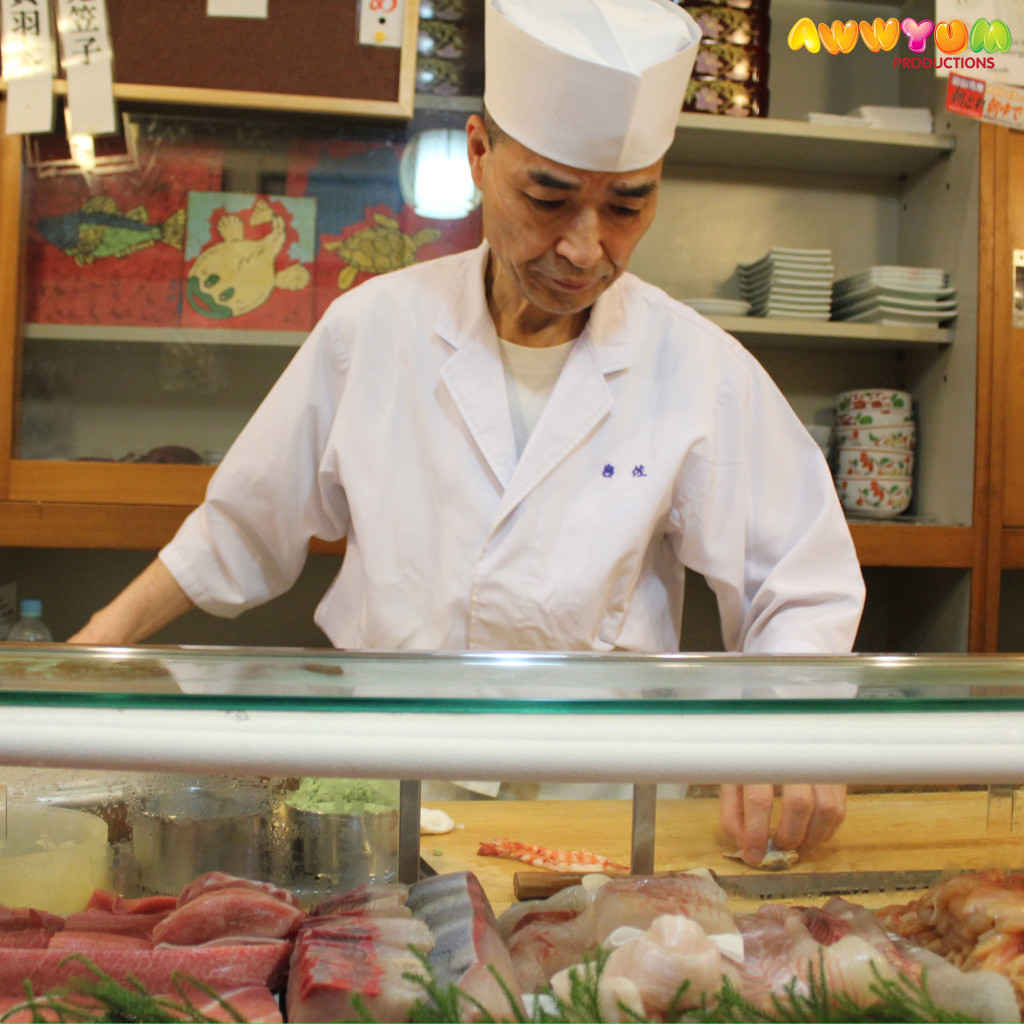 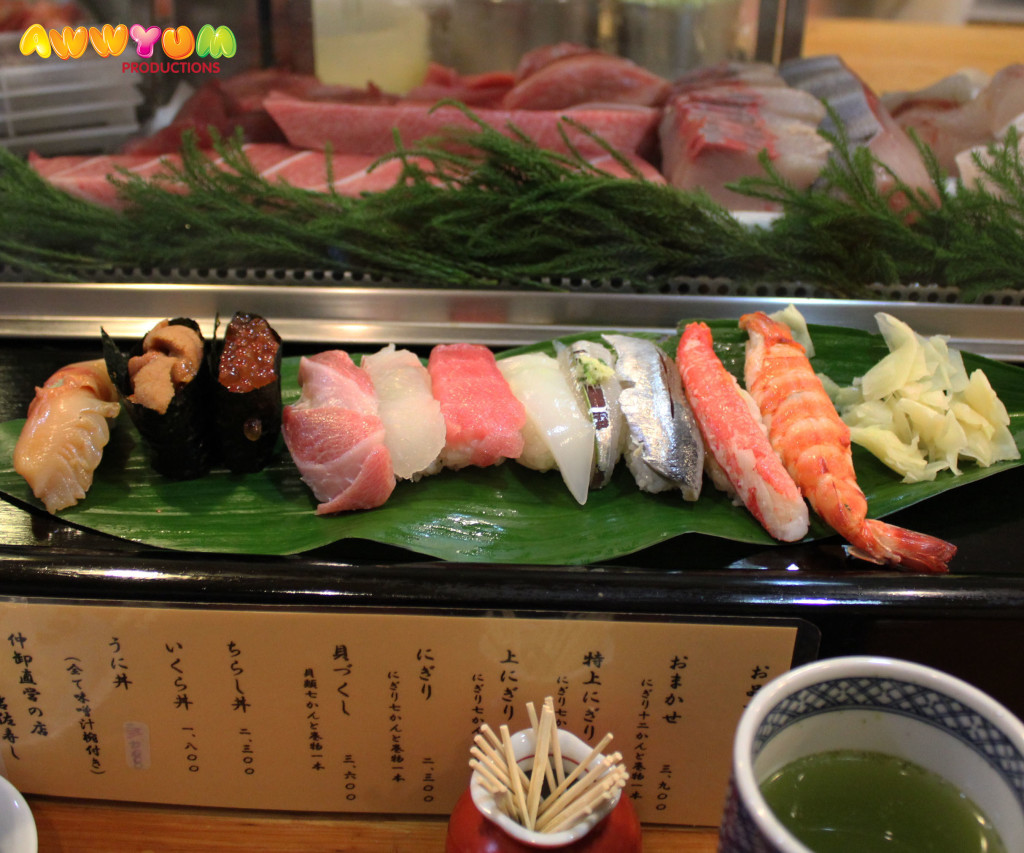 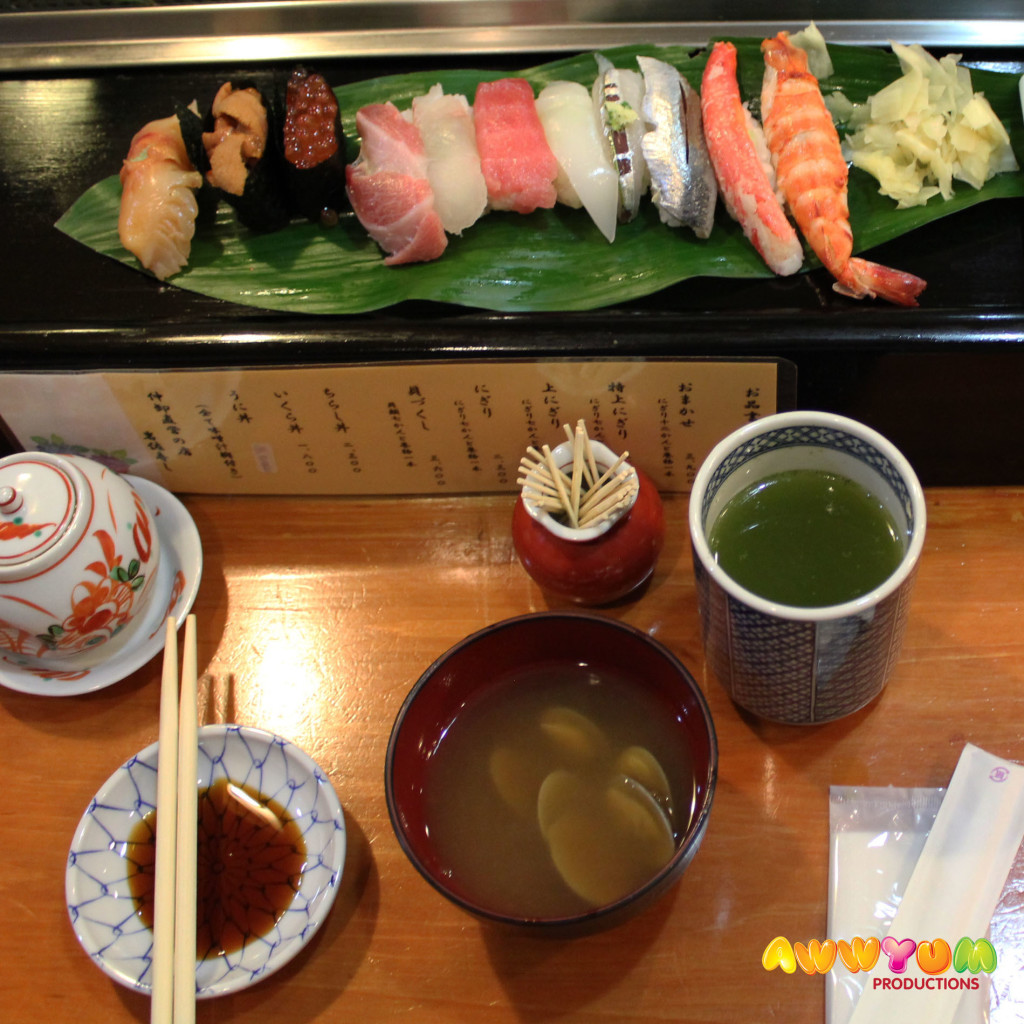 I was so full after this, but it was very satisfying! The set featured everything that you would expect from a high end sushi meal – prawn, crab, uni (sea urchin), ikura (salmon roe), otoro (fatty tuna belly – highly prized!) and squid (in addition to a range of fish sushi!).

After such a long morning, the quality of the food and the service at the restaurant (all smiles – very friendly!) was such a welcome relief! The restaurant also was not full, which meant I could spread out a little bit (rather than be squeezed in!) and enjoy the meal and atmosphere!

Overall, this was a very good meal. The omakase itself was very generous in its variety, the staff and chefs were friendly, and the quality of the sushi was very good! If you happen to visit Tsukiji Fish Market, Isawa Sushi is definitely worth a try! 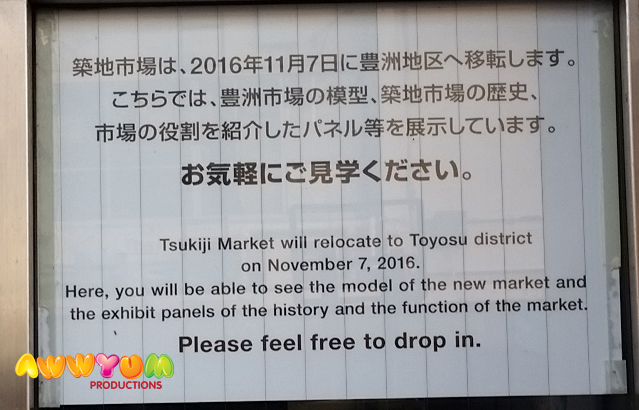 From 7 November 2016, the Tsukiji Fish Market featured in this review will be moving to Toyosu district. The new site will apparently be 40% bigger, with new facilities. It is an exciting prospect, but unfortunately the history/tradition of the original site will disappear.

I am unsure what will happen to the sushi restaurants like Isawa Sushi as part of the move. Lets hope that they will continue serving great sushi at another location!