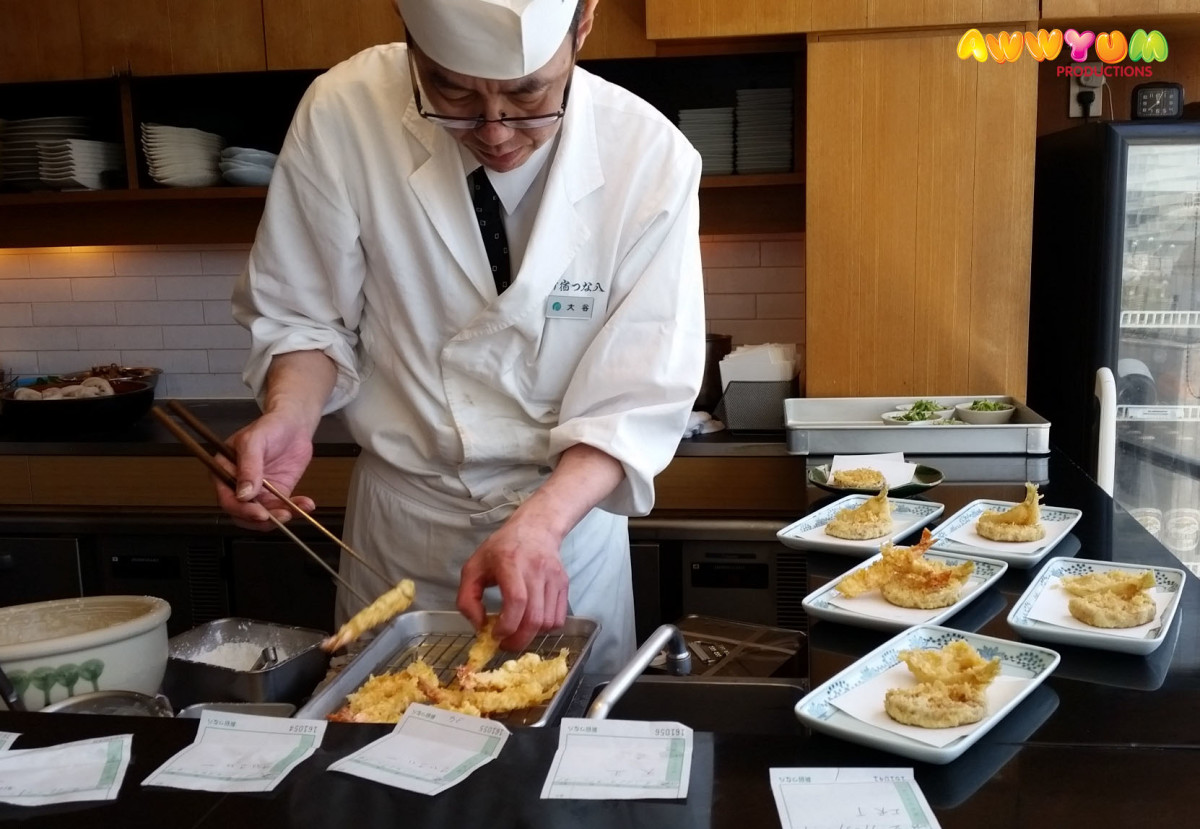 I had just arrived in Japan at Tokyo’s Narita Airport, and like many travelers my first destination was JR Tokyo Station (via the Airport Express Train).

Tokyo Station itself is huge! Being from Melbourne, Australia, there is nothing local to really compare it with. The mix of above ground, subway, airport link and shinkansen trains all meet at this single station. The sheer size of the complex and volume of people was an eye-opener!

One upside to the chaos of Tokyo Station is that it is well serviced by many shopping centres, department stalls and food outlets. I literally stepped off the airport train, met my friend and headed to the 12th Floor of Daimaru to eat at Tsunahachi.

Tsunahachi is a tempura restaurant with a number of branches throughout Tokyo, as well as around the country (Sapporo and Kyoto). Don’t let this dissuade you. In Japan it is common for a restaurant to specialise in a single type of cuisine (if anything, it becomes their speciality). Secondly, chain restaurants in Japan appear to keep their quality and standards high, and can be among some of the most memorable places to eat (as compared with KFC and McDonalds, which are for convenience but arguably don’t serve high quality food). 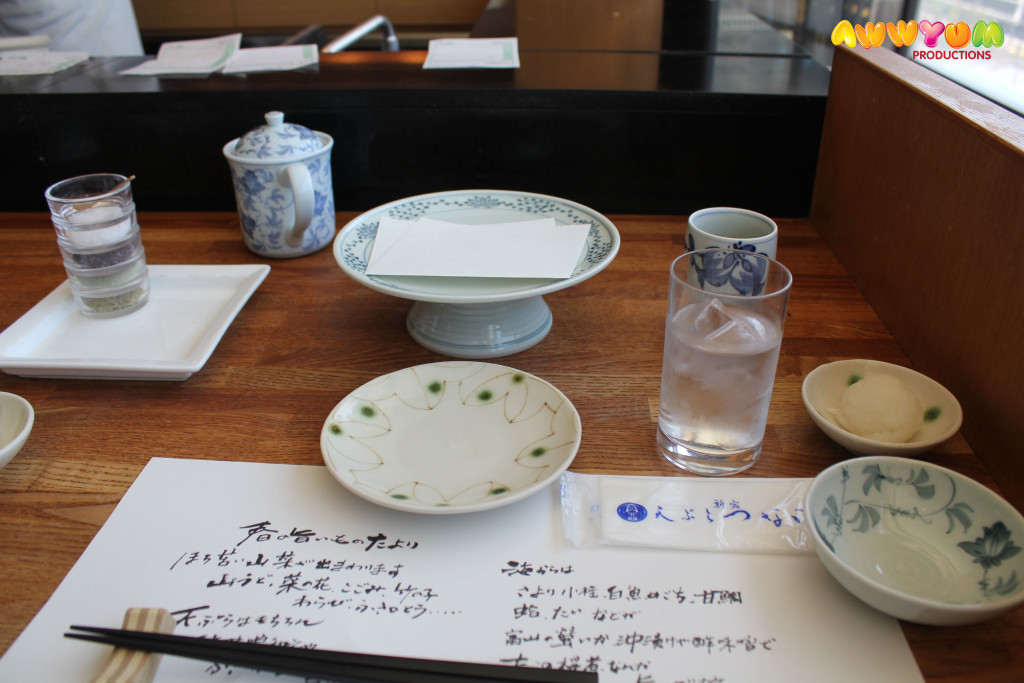 We were fortunate to be seated at a counter, so I could see the chefs hard at work behind their respective fryers. Despite being a counter, there was sufficient space for a variety condiments and side dishes. 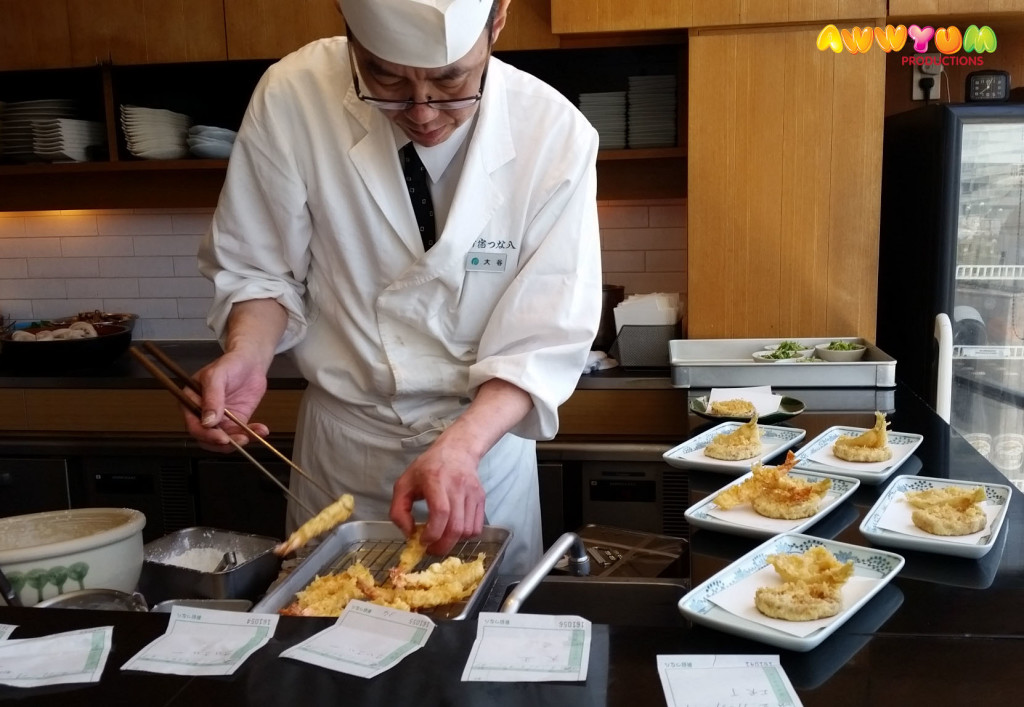 The chefs were not so interactive with the diners, but we literally had the best seat in the house to see them frying up all sorts of different meats and vegetables. 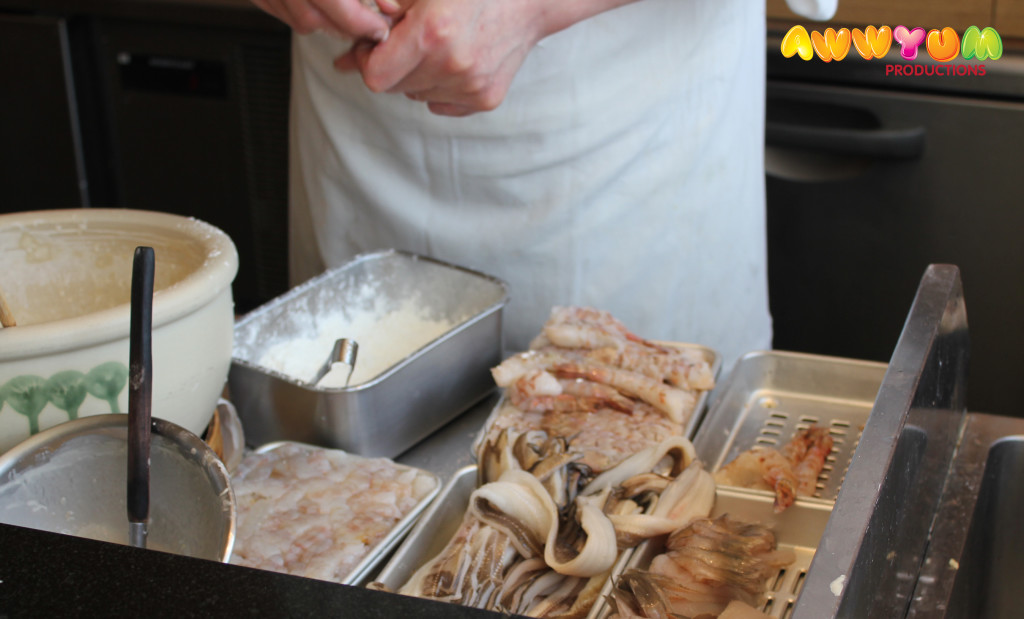 The seafood that they used was particularly fresh. The prawns were actually live (in a tank behind the chefs) and were prepared periodically before frying. I took a peek over the counter and everything looked great. 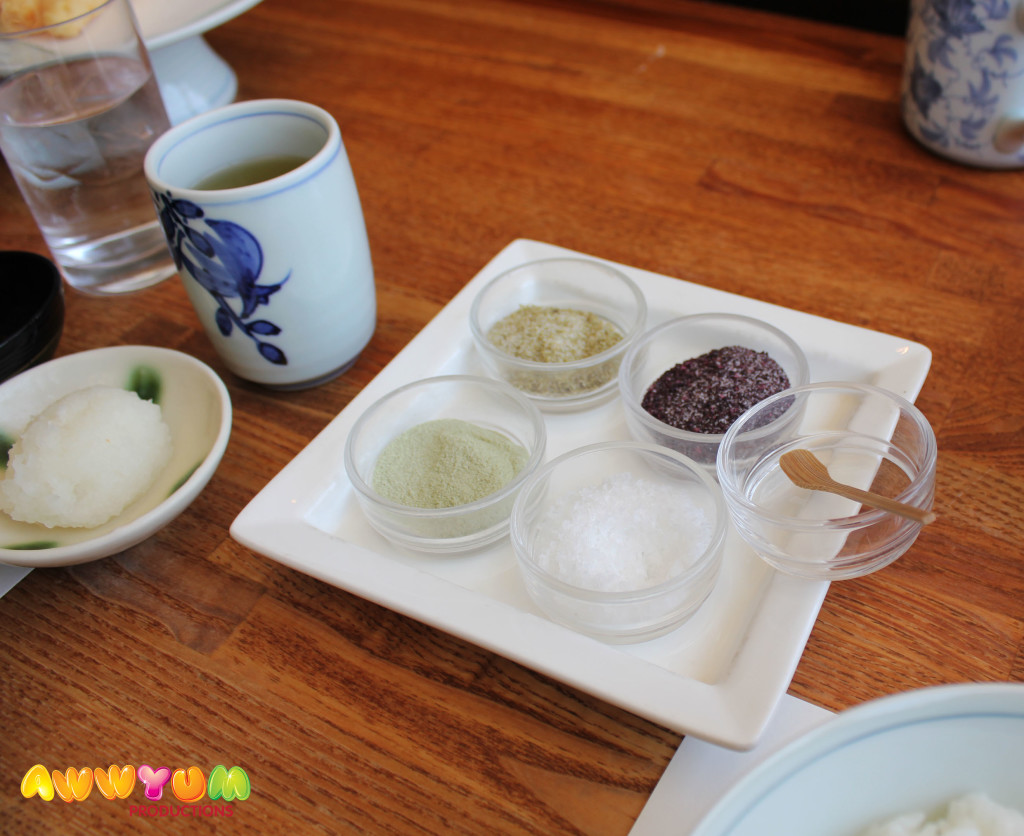 I was inspired by the seafood in front of me, so made a point of ordering a set lunch that featured the good looking seafood on offer. My friend ordered the same set menu. The first thing that we were brought were different types of salts, which are used as a condiment to top your tempura. The salts included wasabi salt, sea salt, shiso salt and seaweed salt. Each had their own distinct flavour!

For tempura novices, there is a guide to eating tempura on the tables (or available from the waiters). It is worth checking out if this is your first time eating tempura in Japan. 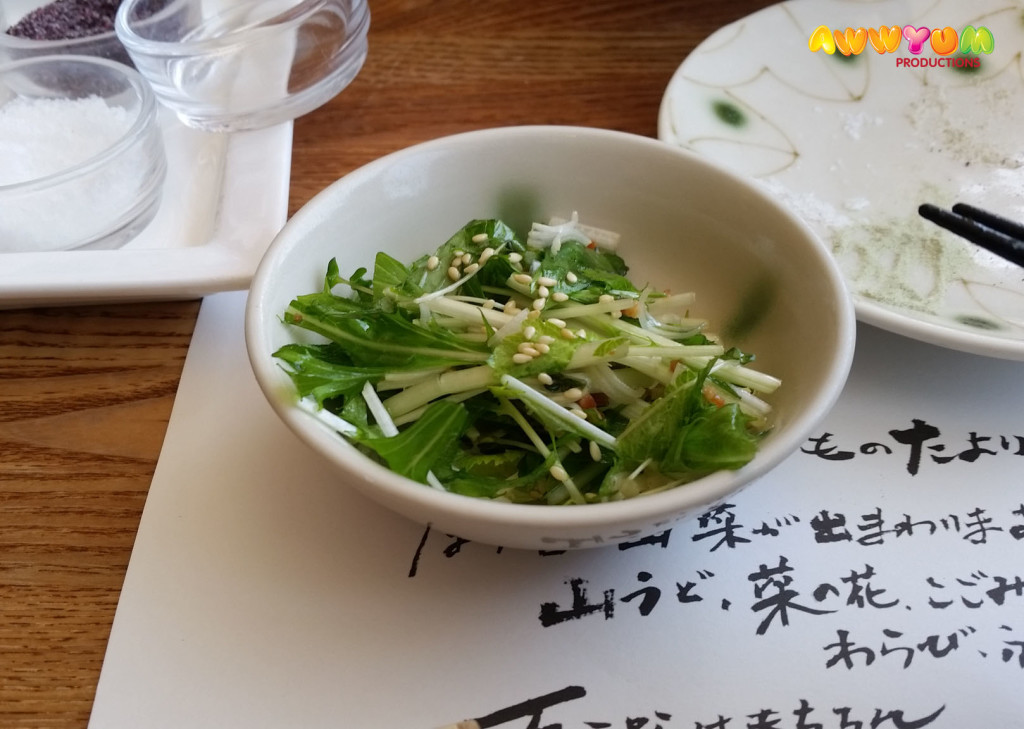 The courses began with a small salad appetizer, as well as a minced radish (which is used also as a dipping sauce). 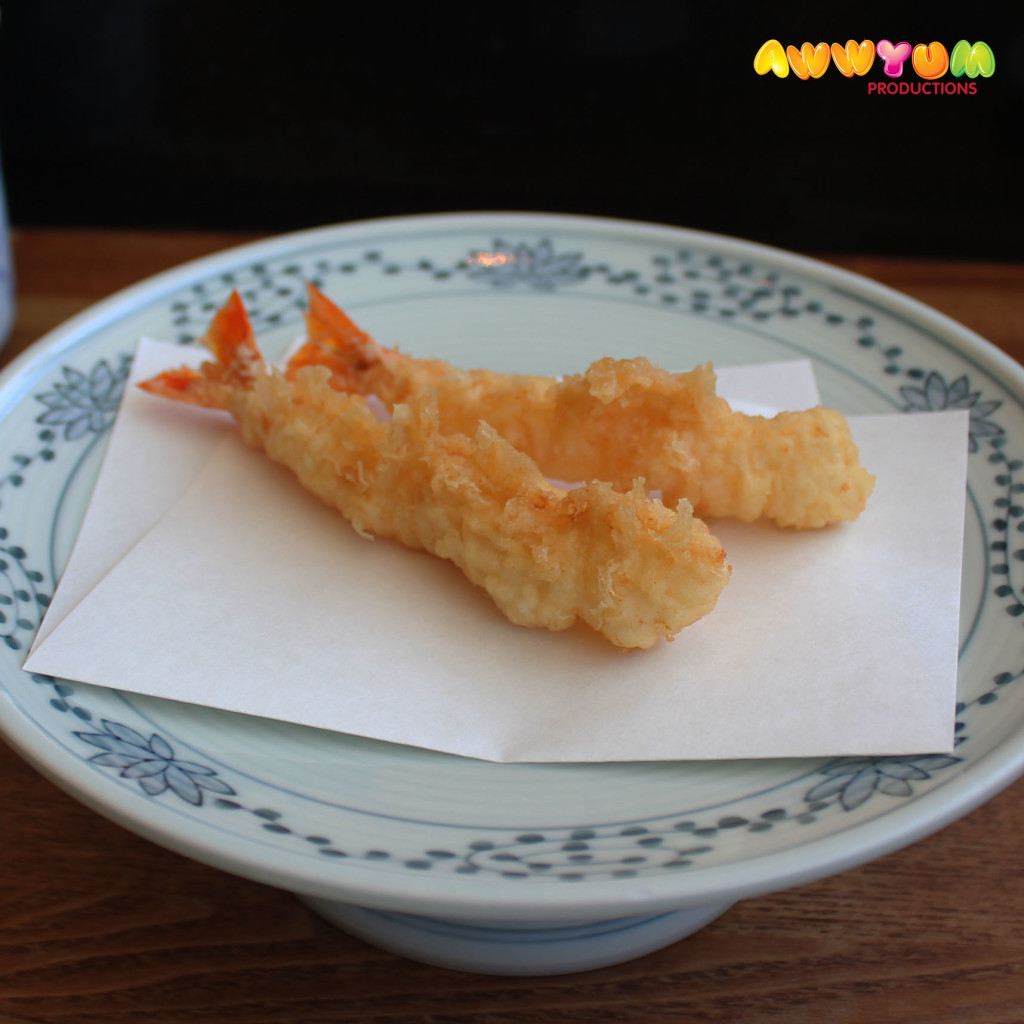 The tempura then started to flow! to start with, we had prawn tempura. 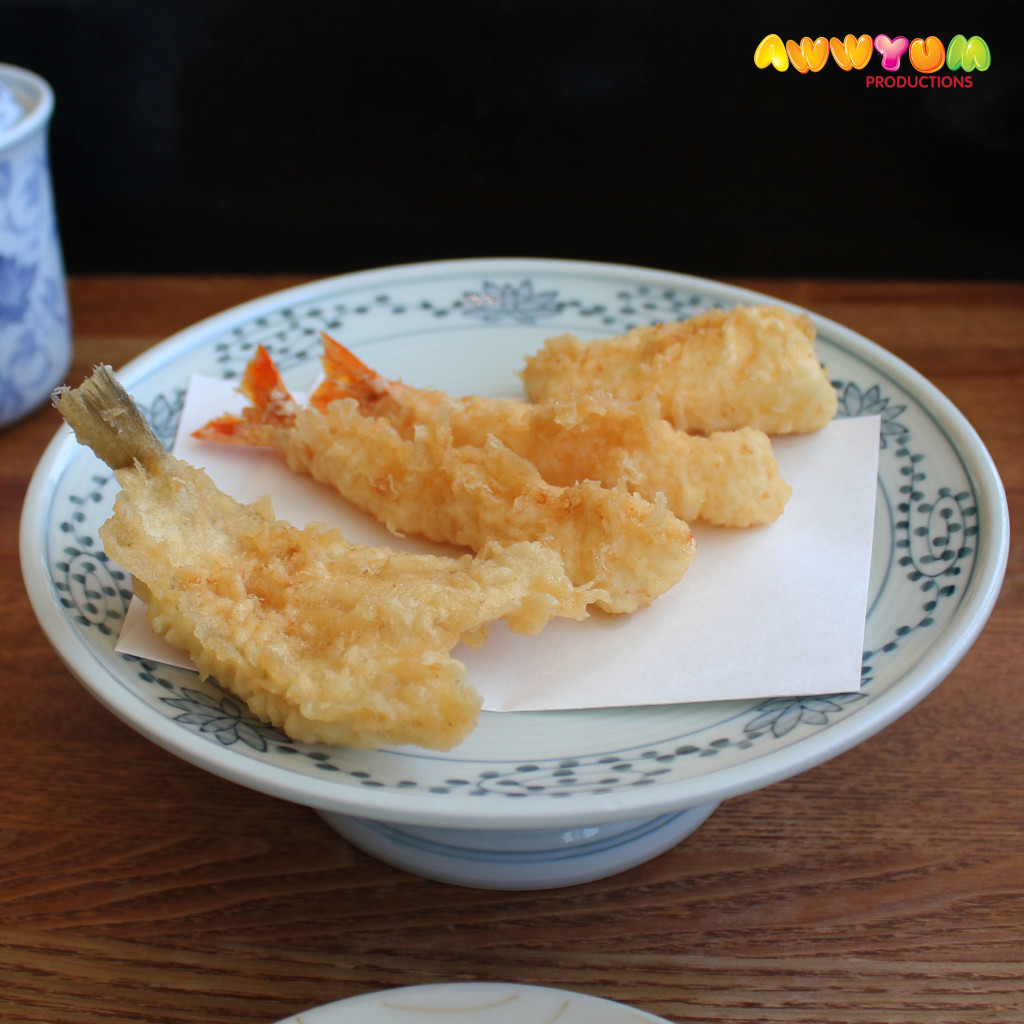 The prawn was then accompanied by squid (top) and a small butterflied white fish, most likely a sand whiting. All three were excellent! The squid was particularly fresh and soft.

The next course was this deep fried clam. I believe its called a ‘storm clam’. Its shell was filled with chopped clam, mushrooms and a few other ingredients, and then deep fried whole. This was the highlight for me. It looks a little ugly, but the taste was unique and full of flavour! 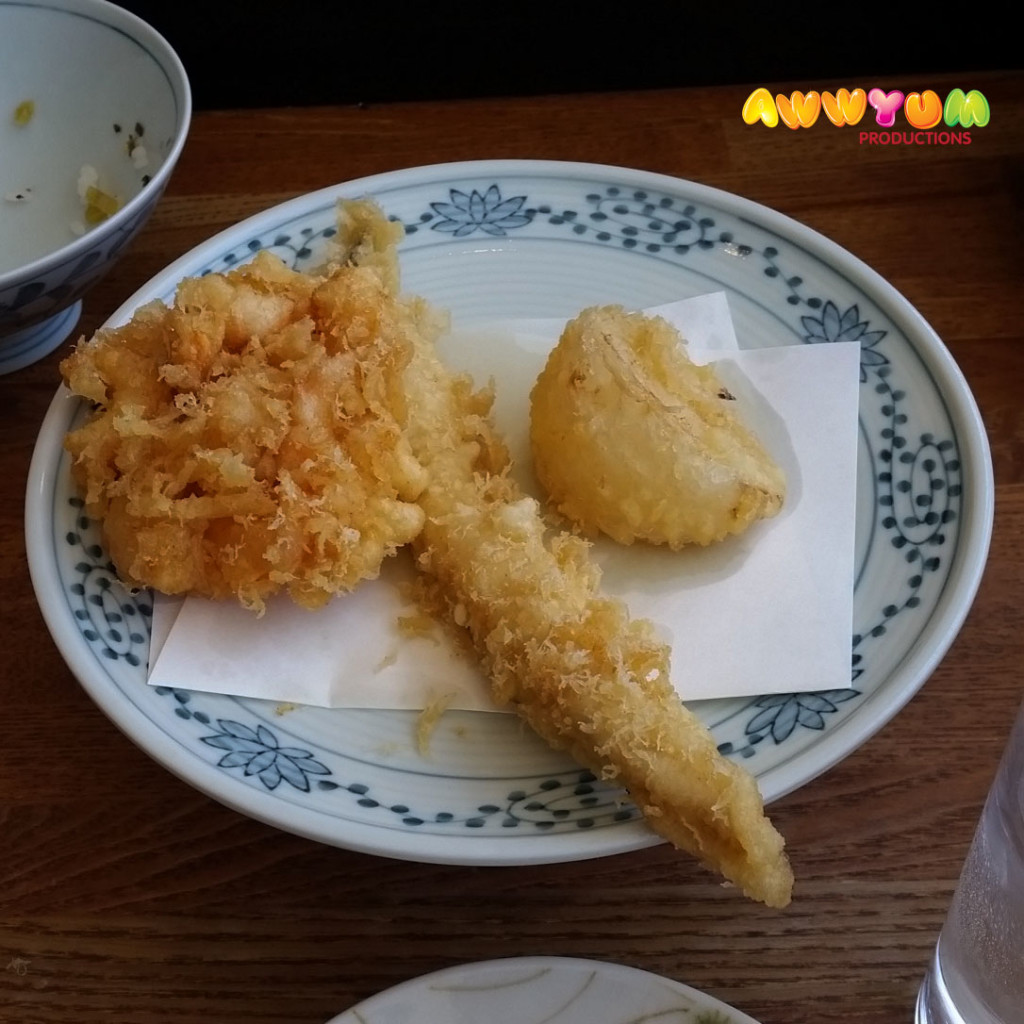 As a final course, we were served kaki-fry (left – small shrimps battered and fried in a big ball!), eel (middle) and onion (right). All three were delicious. I enjoyed the kaki-fry, but after a few courses of tempura it started to feel a bit heavy for my liking.

Overall this was a great start to my trip in Japan.

The pricing for the meals were around 3000yen, which was very good value considering the variety and number of courses that we received.

The food itself was all great. Every piece of tempura was well cooked and full of flavour. The quality of the ingredients were also very good! My only warning would be that a set can contain a LOT of fried food, so it may not suit everyone. That being said, I really enjoyed the meal overall!

Finally, it is worth pointing out that the original Tsunahachi restaurant is in Shinjuku and attracts quite a crowd. I also believe that the menu slightly differs at that outlet. It is worth doing some research to see what you may prefer. However, as a stand-alone, the Daimaru Tokyo Station outlet is very good! Definitely try it out if you happen to be commuting to/from the airport, or have a layover between shinkansen!