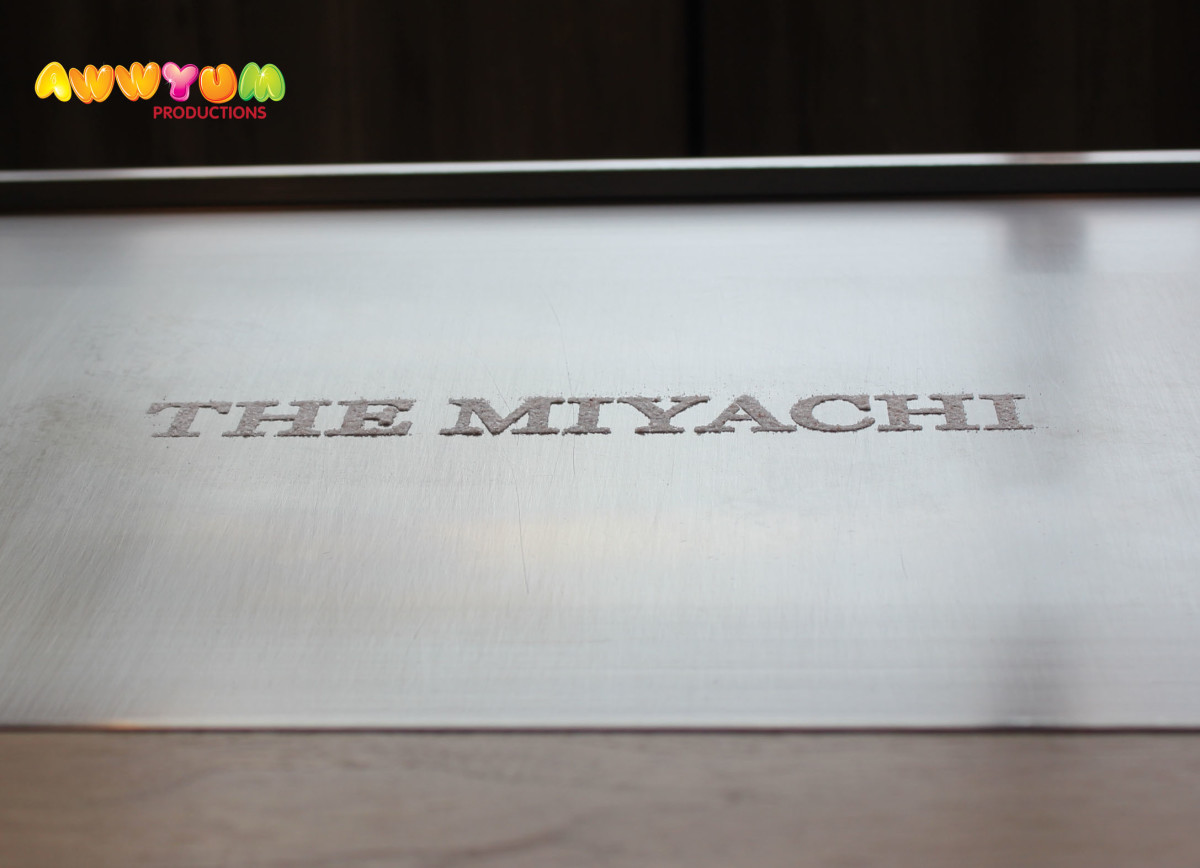 One of the highlights of my trip to Tokyo in April 2016 was trying Kobe Beef! The options for Kobe Beef in Tokyo are actually quite limited. If you do a search online, you will probably only be able to find up to a dozen places serving true Kobe Beef in Tokyo (possibly more if you search in Japanese!). What’s more, Kobe Beef is extremely rare to find overseas.

I chose to try The Miyachi, which is actually one of three restaurants run by the ‘Ginza Miyachi’ group (Ginza-miyachi.com).

The restaurant itself is located on the outskirts of Ginza, close to the Shinkansen line and bordering Shimbashi. It was a particularly wet day, but thankfully it was well signed, assuming that you can find the right building. 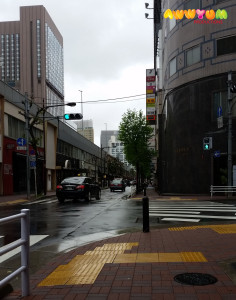 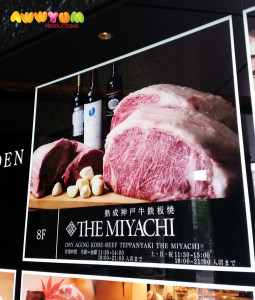 The interior was immaculate compared to the dreary weather that day. 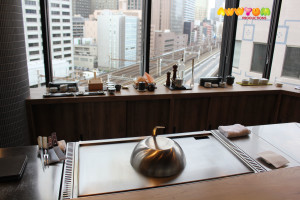 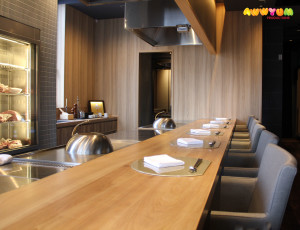 I dined with a Japanese friend. Once we had both arrived at the restaurant we were seated and our set menu began to be prepared. We went for lunch and ordered a 5000yen set which included Kobe Beef and another cut of dry aged Wagyu beef. They also have a number of different set courses for lunch, as well as more extravagant dinner set menus! (nb. at the time of writing, this same set that we ordered does not include Kobe Beef – I was very fortunate!).

In the picture below, the Kobe Beef is the two smaller fillets on the left side. 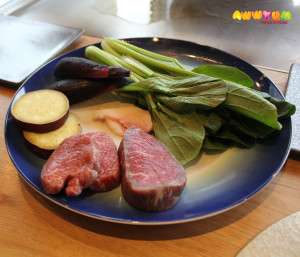 We had our own chef who explained a few things to us (mainly in Japanese, but he spoke some simple English too), and then got straight onto frying the vegetables. 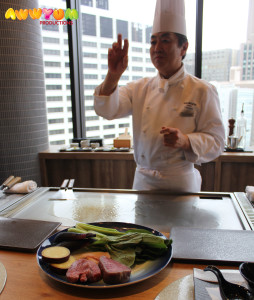 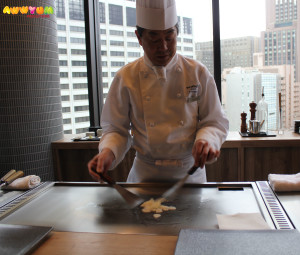 We were offered an appetizer of salad, as our veggies were being cooked. 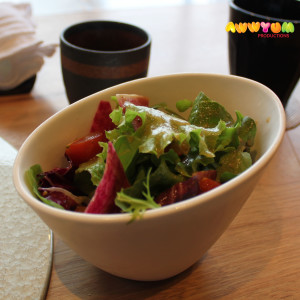 As things were cooking, our chef then showed us a few different cuts of Kobe Beef that they served. The pic below is a sirloin/porterhouse (ridiculous marbling!). 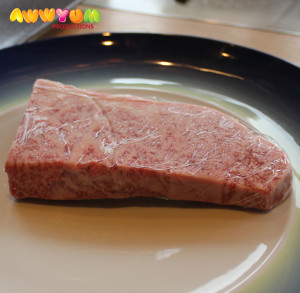 Below is a picture of the various cuts including scotch fillet and possibly rump. The Kobe Beef is branded with a unique purple brand, which can be seen on the picture below. 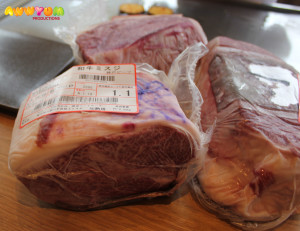 Featured in this picture below the cut that they serve with the lunch set – a ‘thigh cut’ off the bone, which is butchered into a roll/fillet and sliced into steaks. 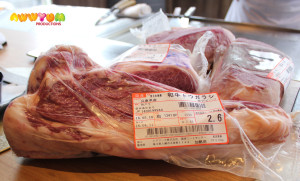 The last cut that he showed us appeared to be the most prized. The shape and marbling is a bit misleading, but I am pretty sure that it was an eye fillet (or possibly scotch fillet). 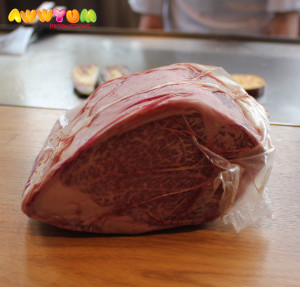 By this time my mouth was almost literally salivating! Thankfully the vegetables were ready, and the meat was on the grill! They were plated a little staggered, but that was no problem! 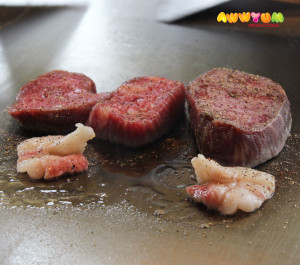 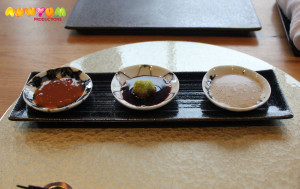 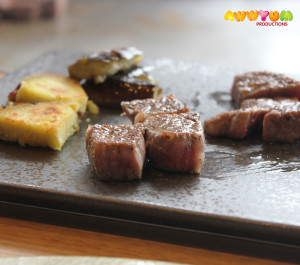 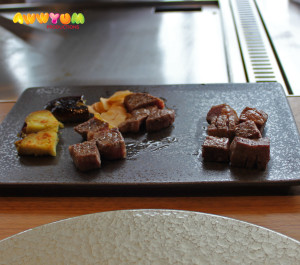 We chose to have our rice ‘upgraded’ to garlic fried rice. This was fried up and served as a separate course with pickles and miso soup. 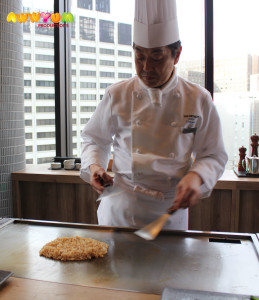 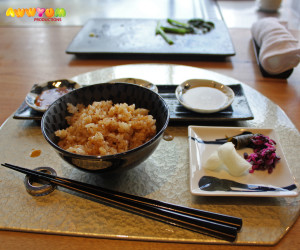 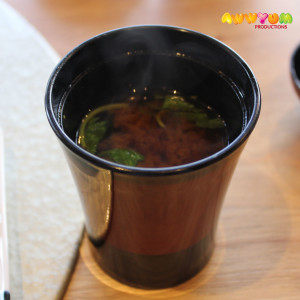 As a final course, we were served dessert and coffee. The dessert was a panna cotta style custard. The coffee was filter coffee, but still not a bad accompaniment to finish the meal. 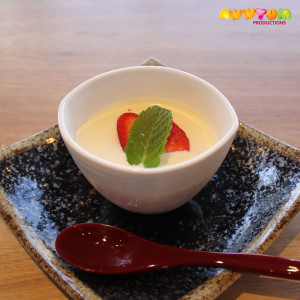 Needless to say, the meal overall was excellent! The service and setting were both top notch, and we were very fortunate to have a friendly and passionate chef cook for us that day.

As for the beef itself, I have to admit that I came with low expectations – we are fortunate to have some great beef in Australia, and because of that I was yet to experience a truly memorable steak outside of Australia. That being said, both the Kobe and other type of beef (from Kumamoto prefecture) were very good. If I had to compare one with another, I would actually say that the non-Kobe was a bit more tender!

I also had low expectations because of the value of the lunch set (which was very good value at 5000yen!). I did not expect a prized cut such as a sirloin or eye fillet, however, the cuts that we were served were better than most steaks that I have tasted.

However, it was the overall experience that made this meal great. A combination of the setting, service, good food, (and good company!) really made this is a highlight of the trip!